By the word of the Lord the heavens were made, and by the breath of his mouth all their host. The heavens declare the glory of God, and the sky above proclaims his handiwork. When I look at your heavens, the work of your fingers, the moon and the stars, which you have set in place, what is man that you are mindful of him, and the son of man that you care for him? For all the gods of the peoples are worthless idols, but the Lord made the heavens.

During the summer, we enjoy escaping to Semiahmoo.  About a half hour drive from our home brings one to a beautiful county park overlooking Blaine Bay and Mount Baker to the east and the Puget Sound to the west.  There is a great walking trail or you can walk out on the beach. It is so fun to be able to head over after dinner to catch a sunset on nice warm days.  This summer we also discovered the fun of low tide.  We enjoyed a mid-day lunch adventure and enjoyed observing starfish, sand dollars and other sea creatures, watching amazing eagles and other birds.  We were able to sneak in a few visits over the summer.  Part of the time, the harbor seals were right close to the walkway and enjoyed giving us a show.

There is always something calming about walking a beach… whether the waves be big and crashing like you’d find on the coast or short and squatty like the ones you find here in the Puget Sound.

Saturday was the first day of spring break for the youngers.  The sweet thing was that it was a free day for Washington State Parks (you normally have to have a discover pass to get into the parks).  We looked at several different places, but due to construction and time constraints decided on venturing to Camano Island.  Camano Island has two state parks within a mile of each other – so if one didn’t work out, there was another right close by.  So we ignored the chores and piled into Big Bumpy.  After looking at the forecasts earlier in the week saying rain… it turned out to be a nice day!  We stopped first at Cama Beach State Park.  Unfortunately there wasn’t much parking there so we headed over to Camano Island State Park.

Between parks, one of the boys spotted a small fawn and was able to catch a blurry image as it crossed the road behind us.  Upon arriving at the park, we sat down for a picnic and watched an eagle soar above us – unfortunately, he disappeared before we were able to take his pic.  After lunch we walked the beach and in addition to just enjoying walking the beach, discovered lots of crabs.  We also discovered that there was another side of the park – so drove over there where there was not only beach but several hiking trails.  With not much time, we headed down one of the trails and found lots of snakes.  After enjoying some outside activities, we made a quick stop at the Cama Beach welcome center as it had been closed when we first arrived.  We had to make it brief as they were closing up shop for the day but there were several interesting displays of various wildlife.

Last week, I took dad and mom to the airport for their flight back to California.  David had ordered wheelchair assistance and told me that I should be able to get a gate pass to help get them through security and wait with them until their plane left.  Having not been to the airport in several years, it was interesting to see all the changes and improvements that had occurred at the local airport.

While we waited, I looked carefully at the boarding passes to verify the time etc.  I noted on each boarding pass some instructions (exact wording not remembered):  you must be at the gate 60 minutes prior to flight, no boarding less than 20 minutes prior to flight.  When boarding started, the airline began by boarding those needing special assistance, which included wheelchair assists.  At that point, it was just dad and a gentleman who had been in line in front of us at check in.  It appeared that the idea was to get all the wheelchairs first as they cannot allow anyone else to go up the boarding ramp until the wheelchairs are back down on the ground.

Next, they called for those who had purchased priority boarding.  During priority boarding, another wheelchair arrived.  So after the priority passengers were boarded, the boarding process was stopped until the passenger needing assistance was on and the wheelchair was back down. There were many individuals from young to old.  One set of kids excitedly told the gate assistant that they were going to Disneyland and as they were going through the door, the attendant enthusiastically yelled, “tell Mickey hi.”  At some point in the boarding process, a fourth wheelchair arrived and they again stopped the boarding to load this one; however, this one ended coming back with the individual still in it.  The individual was wheeled back down towards the main lobby and boarding resumed.  Pretty soon boarding for all the other individuals was complete and the final boarding call was issued.

Soon after, the fourth wheelchair came back and the individual was wheeled back out to the plane only to return again.  In the meantime, the gate attendants had noted that there were four individuals who were scheduled for the flight but hadn’t made it to the gate yet and so those individuals were paged to come to the gate immediately.

The doors to the outside were all closed as the flight got ready to take off.  While the plane was still sitting there, two “college-aged” individuals walked up.  I figured they must be early for the next flight, but then overheard them talking back and forth between themselves… “oh look, there’s the plane for LA.”  “I wonder if (name of person) is already on?”  “I wonder where all the people are?”     “I thought there would be more people here.”  They saw me standing there and asked if that was the plane to LAX and I answered yes.  They then asked if people had boarded and again my answer was yes.  Then they asked “well, how are we supposed to get on.”  This time I had to say I wasn’t sure.  So they went over to the locked doors almost as if they were going to knock.

Around that time, one of the gate attendants came back inside and they informed her that they were supposed to be on that plane.  She replied “I’m sorry, the door is shut and once the door is shut, it can’t be opened.”  These college-aged individuals were not so happy…  “what? But they never called us.”  The gate attendant replied that the plane door closes ten minutes before take-off and they had MISSED it.  Shortly after, the attendant who had been trying to help the older individual came by and asked if they had missed their plane and informed them that another passenger had missed the plane too.  He told them that the only thing they could do was to go to ticketing and see how they could help.  The college–aged individuals questioned, “well can’t we just wait ‘til the next plane??”  The attendant replied that the next flight to LAX would not be until Friday, but maybe they could catch an earlier flight to Vegas and then on to LA but they would have to go to ticketing to find out those options.

As all this unfolded, I thought about Noah and the ark and how once God shut the door of the ark no one else was able to get in; I thought about the parable of the ten virgins who were “waiting” for the bridegroom (Matthew 25:1-13).  I was reminded too of a much more important appointment – an appointment that if one is not ready, there is no second chance.  The appointment?  The end of this life on earth – whether that is by physical death or when Christ returns.

God in His holiness cannot allow sin in His presence.  Each and every person on earth has sinned.  However, at Christmas, we celebrate that God being rich in love and mercy sent His son to this earth.  Jesus Christ was born, lived a sinless life and then took the punishment for each and every one of our sins by His death on the cross; raising again the third day, He conquered death and sin.  What a great salvation! By accepting His free gift of salvation, and being covered in His righteousness, one will be ready for an eternity… forever with Christ.

Such words of hope:

Luke 2:10-11 “Then the angel said to them, ‘Do not be afraid, for behold, I bring you good tidings of great joy which will be to all people.   For there is born to you this day in the city of David a Savior, who is Christ the Lord…’”

Ephesians 2:4-9 “But God, who is rich in mercy, because of His great love with which He loved us, even when we were dead in trespasses, made us alive together with Christ (by grace you have been saved), and raised us up together, and made us sit together in the heavenly places in Christ Jesus, that in the ages to come He might show the exceeding riches of His grace in His kindness toward us in Christ Jesus.  For by grace you have been saved through faith, and that not of yourselves; it is the gift of God, not of works, lest anyone should boast.” 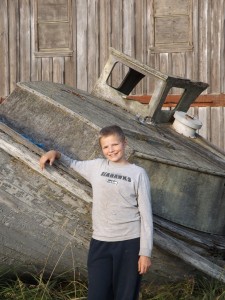 Hello my name is Jeff.  I am the 4th of the 6 Moore kids.  I am 11 years old.  I am going into 6th grade at a middle school.  I love reading, playing football, and watching the  Seattle Seahawks games.  Now I am going to tell you about my summer.  My summer has been great!  The weather has been beautiful and hot.  One day when I checked the thermometer it read 91 degrees!  Lately, I have liked reading and riding my bike around.  Especially to my Grandma and Grandpa Moore’s house.  I also like playing football with my brothers and neighbors.  This summer I have forgot to add has been very crazy.  With my Grandpa Anderson who was visiting, ending up in the hospital, Mom and Grandma Anderson have been gone a lot.  Normally, I don’t see them till 9 pm. But, today I woke up at 8am to see them off.  So much for sleeping in!  Also, Rosie and Jos have been working  lately so I don’t see them very often either.  Well, that is how my summer has been so far.  Now, I must stop talking.

Write to you soon, bye for now, Jeff